a Poesia percorre a Terra. 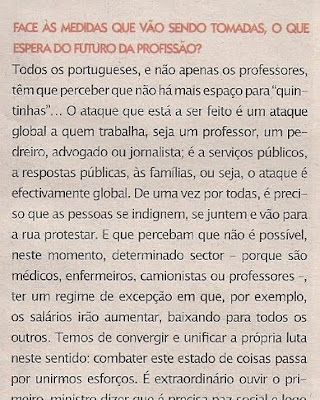 "Não me obriguem a vir para a rua gritar"

Via JMA, fui ter a este artigo, do qual retiro alguns destaques:
«So, Finland basically focuses on teachers and not on domestic testing. Those PISA tests that you cite are international assessments.»
«This is the antithesis of what we're hearing about in the United States in terms of so-called education "reform." When you hear the debate in the United States over education, the idea is that we need to demonize teachers and that the real way to fix our education system is to simply test the hell out of kids. Why do you think there is such a difference between the attitudes of our two countries? »
Então terá sido esta influência das ideias de reforma nos EU que Nuno Crato "assimilou" e o levou a andar a defender na TV exames e mais exames? Pois então... mandará fazer os exames (se tiver dinheiro), e é possível que, a seguir, venha a  alardear a sua satisfação com os resultados, já que é capaz de ser fácil (infelizmente) levar a maioria dos professores a não fazerem outra coisa que treinar e treinar os meninos para responderem bem às questões desses exames, mesmo que os meninos esqueçam as respostas no dia seguinte aos ditos exames. E se os nossos alunos aprenderem a decorar em vez de aprenderem a pensar, quando isso se perceber Nuno Crato estará fora do governo, ilibado, como é costume,  de responsabilidades sobre o que tenha feito à Educação das nossas crianças.
Já agora, continuo mais um bocadinho com o artigo:
«But beyond that, what I find so striking is that the reforms in [the U.S.] have been driven and led by businesses for the last quarter century. It was David Kearns at Xerox and Lou Gerstner at IBM calling for a national summit on education and they didn't invite any educators. They invited CEOs and governors and senators and congressmen.
Now, I understand and respect business needs for better skills, and I understand a certain mistrust of the education system based on the fact that it's the only profession where you're guaranteed a job for life. But what's different in Finland is that there has been a bipartisan consensus over 30 years about the importance of education and the importance of high-quality teaching as the real solution. It's been a partnership between businesses, policy makers and educators, and that's what we need in this country but don't have.»
«This is what Finland has done that's different - they've defined what is excellent teaching, not just reasonable teaching, and they have a standard for that. Second, they've defined what is most important to learn, and it's not a memorization-based curriculum, but a thinking-based curriculum. So even in our wealthiest districts we're not approaching that global standard of success and excellence.» (Destaque meu)
«How did Finland manage to elevate the role of teacher in the eyes of the population to something that is not just an honorable profession, but a revered profession, whereas in the United States, teachers are so regularly denigrated?
They really think about teachers as scientists and the classrooms are their laboratories. (...) They're taking content courses that enable them to bring a higher level of intellectual preparation into the classroom.
The second point is that they've defined professionalism as working more collaboratively. They give their teachers time in the school day and in the school week to work with each other, to continuously improve their curriculum and their lessons. We have a 19th century level of professionalism here, or worse, it's medieval. A teacher works alone all day, everyday, and isolation is the enemy of improvement and innovation, which is something the Finns figured out a long time ago. Get the teachers out of their isolated circumstances and give them time to work together.» (destaques meus neste parágrafo)
Pois... Rever a formação dos professores e investir nela custa dinheiro (Onde estava Nuno Crato quando havia dinheiro?)
Publicada por IC à(s) sexta-feira, setembro 09, 2011 0 comentários 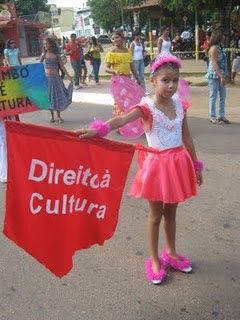